The state legislature recently passed SB 591, which makes it more difficult for plaintiffs to get punitive damages in civil actions. The bill states that punitive damages shall only be awarded if the plaintiff proves by “clear and convincing evidence” that the defendant intentionally harmed the plaintiff without just cause or acted with a deliberate and flagrant disregard for the safety of others. Furthermore, it states that a claim for punitive damages shall not be contained in initial pleadings, and may only be filed as a written motion with permission of the court no later than 120 days prior to the final pre-trial conference or trial date. “A pleading seeking a punitive damage award may be filed only after the court determines that the trier of fact could reasonably conclude that the standards for a punitive damage award, as provided in the act, have been met,” the bill summary states. Gov. Mike Parson has not yet signed the bill.—From Managing Editor Phil Gusman

A bill originally introduced to force business interruption policies to cover COVID-19-related losses has been rewritten and now stipulates that business interruption policies shall include a notice of all exclusions on a form prescribed by the state’s commissioner of insurance. As originally introduced, SB 477 stated, “Notwithstanding any other provision of law to the contrary, every policy of insurance in force in this state on March 11, 2020, and thereafter insuring against loss or damage to property that includes the loss of use, loss of occupancy, or business interruption shall be construed to include among the perils covered under that policy, coverage for business interruption due to imminent threat posed by COVID-19….” The rewritten version that requires only a notice of exclusions passed the Senate on May 19 and was sent to the House.—From Managing Editor Phil Gusman

Gov. Kay Ivey issued a proclamation offering liability protections for businesses and health care providers as the state reopens during the COVID-19 pandemic. The proclamation says encouraging businesses to reopen responsibly will “improve public health and preserve the economic wellbeing” of people in the state, and adds that businesses may be reluctant to reopen out of fear of lawsuits. As such, the proclamation states that businesses, health care providers, and other covered entities shall not be liable for death, injury, or damage to property arising from any act or omission related to COVID-19 transmission unless a claimant shows “by clear and convincing evidence” that the damage was caused by the entity’s “wanton, reckless, willful, or intentional misconduct.” Where liability is established for a claim that does not involve serious injury or death, liability is limited to actual economic compensatory damages, and excludes non-economic or punitive damages.—From Managing Editor Phil Gusman

Difference Between “Those Sums” and “All Sums”

In Lubrizol Advanced Materials Inc. v. National Union Fire Ins. Co. of Pittsburgh Pa., the underlying lawsuit involved a dispute with a customer to whom Lubrizol had sold resin for use in plumbing systems over a seven-year period. These systems ultimately failed and the customer sued Lubrizol for indemnification. Lubrizol settled the case and then sought reimbursement from its various insurers. But when National Union refused to cover damages outside its policy period, Lubrizol sued in federal court and argued the term “those sums” in the policy was analogous to the term “all sums” found in policies other Ohio businesses have used to recover damages for long-term injuries caused by environmental pollution and asbestos exposure. In response to a certified question from a federal district court, the Supreme Court held that “there is no reason to allocate liability across multiple insurers and policy periods if the injury or damage for which liability coverage is sought occurred at a discernible time.”—From Northeast Ohio Chapter President Michael C. Brink

In May, the family of a beef plant worker who died from COVID-19 filed a wrongful death action in the Court of Common Pleas of Philadelphia County against his employer, JBS. The suit alleges that JBS failed to provide basic protective equipment for workers, forced its workers to work in close proximity to one another, failed to provide testing for individuals who were exposed to the virus, and discouraged workers from taking sick leave. Further, it is alleged that JBS failed to follow OSHA and CDC recommendations to close crowded workplaces and to limit the numbers of workers. It is claimed that several workers contracted the virus at the plant in March but the plant remained open for days after these confirmed positives. This lawsuit is the first of its kind to be filed in the state.—From CLM Member Andy Kessler

Phil Gusman is senior managing editor of CLM magazine, a publication of the CLM.  phil.gusman@theclm.org 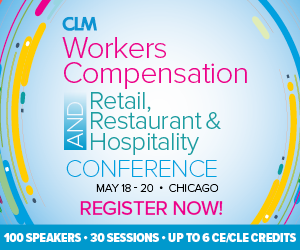